Want to make most of your first India trip? Why not, try Golden triangle tours? These tours offer you a beautiful peep into the diverse cultures, royal traditions and heritages within a short frame of time. If you are wondering from where to begin this vast subcontinent’s tour, how about the going for the Golden triangle tour packages?

Golden triangle tours take you on a stroll to India’s three most prominent tourist destinations, Delhi-Agra- Jaipur. Imagine ending up being in an altogether different world of British, Rajput and Mughals! Does not it seem fascinating?

Now the question arises what exactly does the Golden triangle tour packages comprise of? The solution to your question lies below:

A glimpse of the Capital and its history: Delhi is a place which one cannot simply stop loving. It has so much to offer to its visitors from its cultural heritage that stands in the form of historic monuments such as Red Fort which is an epitome of a finely crafted Mughal architecture, Qutub Minar, the world’s tallest minaret which was built by the first Muslim ruler of Delhi named Qutab-ud-din Aibak, Jama Masjid, India’s largest mosque from where you can get a beautiful view of Old Delhi. When you talk about Old Delhi, Chandni Chowk is first thing that hits up our minds. If you are food lover or a shopaholic, this lively place of the city would be a paradise for you. Chandni Chowk is truly an essence of old Delhi and an experience that you cannot afford to miss out.  Other major centre of attractions of the city include Jantar Mantar, Humayun’s Tomb, Lotus temple, Old fort, Bangla Sahib and the list goes on. The more you explore this place, the more closer you will find yourself to this magnificent city.

Visit to one of the Seven Wonders of the World, Taj Mahal in Agra: Usually, Gold triangle starts with an exploration of the capital city and then heading to Agra. While traveling from Delhi to Agra, you will come across Fatehpur Sikri which was founded as the Mughal capital in 1571 by Emperor Akbar. Do not miss out to stop at this incredible city and take a glimpse into the Mughal Empire including the life of Mughal Emperor Akbar. 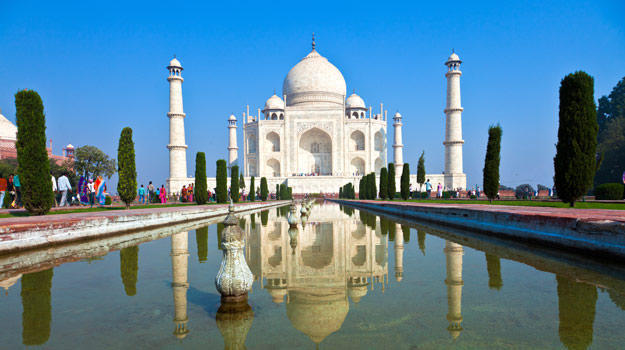 These Golden Triangle trips are incomplete without a visit to one of the Seven  Wonders of the World, Taj Mahal which symbolizes the ruler Shah Jahan’s infinity love for his beloved wife Mumtaz Mahal. Built in between 1631 and 1648, Taj mahal is a perfect blend of persian and Mughal architecture.

Explore the Pink City: Jaipur is known for its ancient monuments and palaces which hold an   important significance in its history. Start your Pink City tour by exploring the streets of the Old City. Within a radius of few kilometers, you can find the major jewels of the city, Hawa Mahal, a palace in the city which is built with pink and red sandstone, City Palace which depicts Rajasthani and Mughal architecture and Jantar Mantar which is a home to distinct astronomy instruments. Roam around the city and take souvenirs in the form of cherishing memories and handcrafted items.

Seems exciting? Pack up your bags and head to explore India like never before!