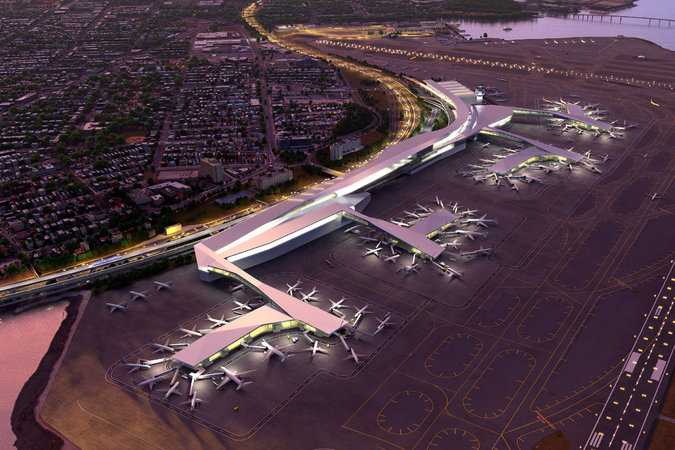 New York's often-mocked but close-in and convenient Laguardia Airport will get a total make-over within the next six years, under plans announced yesterday by Gov. Andrew Cuomo. Essentially all the existing buildings will be shifted to allow better runways and more taxiways, as well as providing up-to-date terminal operations.

The airport is located on the north shore of Queens, one of NYC's five boroughs, and is squeezed between a major highway and Flushing Bay. Although it's one of the nation's busiest airports, its terminals have lagged behind, leading Vice-President Biden last year to call it a "third-world" airport.

The $4 billion plus plan calls for basically tearing down all the existing terminals and rebuilding them not quite in the same places, while keeping airport operations running. The terminals will be shifted closer to the highway, leaving more space behind for aircraft operations, hopefully ending the congestion that has given Laguardia one of the worst records for delays.

The plan also includes (finally!) linking the airport to the subway system by an extension from the nearby Willets Point station. There will also be added ferry services to the waterside of the airport. Water and Laguardia are not a new mix, by the way; the old Terminal A building is known as the Marine Air Terminal, and was built as a base for Pan Am's flying boats of the 1930s. It's the one terminal that will stay in its place.

Illustration: Office of the Governor