Hamburg has played an important role in Germany’s economic and industrial history. Today it is still the center of the country’s shipping industry, and it is Europe’s third-largest port. Its reputation had been one of an industrial city, with nothing much to see, but in recent years it has become a tourist destination with a growing arts scene. I decided it was worth checking out on a recent trip.

Sitting along the Elbe River, Hamburg’s history dates back to the early 800’s, when Charlemagne ordered the construction of a castle to stand against invaders from the east. While it was attacked and sacked several times over the centuries, it maintained its importance. In 1189 it was granted the status of “Free and Imperial City” by the Holy Roman Emperor, giving it both political and economic independence.

In 1266 Henry the III of England signed a contract that established free trade with the city-states of northern-Germany, forming the Hanseatic League. The League controlled shipping and trade in northern Europe from the 1300’s until around 1600. Hamburg’s economic and shipping importance allowed it to maintain its independence after the fall of the Holy Roman Empire in 1806 and up to the unification of Germany in 1871. Today, it’s official name is still The Free and Hanseatic City of Hamburg. One of Hamburg's many canals

The first thing that I noticed while walking around Hamburg is that, like Venice, it is built on a collection of islands. You can’t walk too far without running into a canal or lake. Just north of downtown there are two lakes – the Binnenalster (Inner Alster) and the Aussenalster (Outer Alster). There lakes are formed by the damming of the Alster River in the city. The names refer to their position relative to the original city walls.

I had taken the Hop-On/Hop-Off bus around the city, and I got off along the Aussenalster for two reasons. The lake has a beautiful park along its shore. This area became the home to Hamburg’s rich at the end of the 19th century, and the street along the lake is lined with buildings that had been built as mansions. Today they house offices and schools, cultural institutions, and some high-end stores. This neighborhood, Rotherbaum, is also home to the University of Hamburg. In among its high-end stores there are inexpensive restaurants. Here you will also find the Museum of Ethnography, which is what Germans call the museums dedicated to non-European cultures. The second part of my walk was through the center of the city, from Stephensplatz, through the Gänsmarkt to City Hall. This area has been fully rebuilt since the end of World War II, but it has been done in a way that melds the old and new. Height limits were placed on buildings, so that the profile has been maintained. You don’t have skyscrapers towering here, in fact you have to look carefully to figure out which buildings were put up more recently. I also visited two museums during my stay. One was the Kunsthalle, one of the main art museums in the city. It has a large collection of works by German artists, from medieval times through contemporary era. When I visited, the Kunsthalle was hosting an exhibition of Thomas Gainsborough landscapes. While many people know Gainsborough for his portraits, landscapes were his true passion. It was in this genre that he felt most free to experiment and push the boundaries of both his skills and the accepted style of art.

Its permanent collection includes several pieces by Max Beckmann, whom I love, and a whole building dedicated to contemporary art. It was here that I developed my new theory of art – “a contemporary artist has never met a floor that wouldn’t be improved by adding a pile of dirt or rocks.” 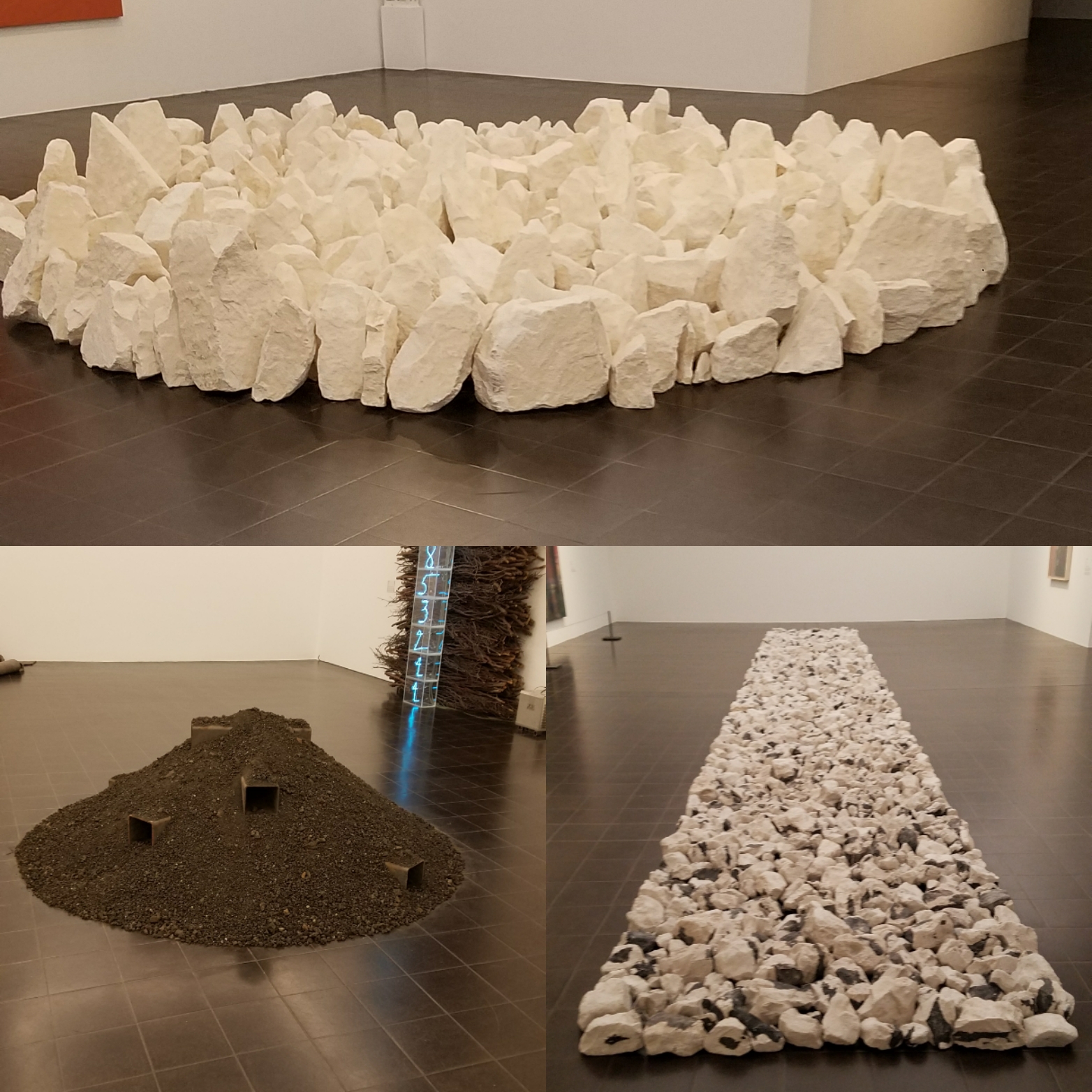 Three different piles on the floor at the Kunsthalle

The other museum I visited was the Deichtorhallen Hamburg. These two former market buildings among the train tracks and canals are now exhibition spaces that are mostly dedicated to contemporary art and photography. Because they were markets, the interiors of these buildings are large and open. This not only allows for the display of large works of art, but also allows for the chance for some excellent people watching. There was an exhibit of drawings by Roberto Longo, whose work is almost photographic. They are large, often 2-3m (6-8 feet) tall and 5 m (15 ft.), or more, wide. As interesting were the reactions of the people who came to see these pieces. Hamburg’s history and present role as industrial city is evident, but it has become much more than that. It is definitely worth a visit.