Jumping ahead of the airlines and hotel chains, Airbnb has opened its first list of lodgings available in Cuba, mostly rooms in existing "Casas Particulares," which are private rentals of rooms in homes. Airbnb, famous for "disrupting" the lodging industry in general, says that this is a non-disruptive entry into Cuba because it works with existing structures.

Of course, starting to do business in Cuba has other issues, including many hosts who have no internet service and who operate on cash. Airbnb's advance agents had to build a network of intermediaries to manage listings, and a licensed funds remitter to pay the hosts in cash.

There are about 1000 listings in the first group, mostly clustered in Havana. Bloomberg News for MORE 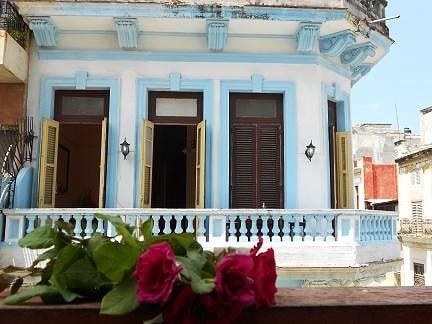 It's big news - BBC had an interview with one of the Airbnb guys this evening, talking about just this.  I'm getting ready, just watched 'Our Man in Havana', (1959, Alec Guinness).

The internet is accessible for most people in Cuba.

Phone lines are still a rare item for private houses.

Many share a local service with business and families using the same web address.

Just like we used to - when we shared a public phone.

I know this is open to double meaning in this context...but yes, I remember sharing a party line. Leavenworth, KS, 1951.

Did it go Brrr....Brrr... or was that the Polar Bear without his coat on ?

Yes party lines were great fun if you picked up the receiver when someone else was talking.

Garry, it seems like you were a naughty boy.  I suspect you actually took part in some of these party line calls, rendering some good advice, I'm sure -- whether wanted or not.

PHeymontGumbo Guru
Don't remember exactly what it sounded like, but I remember what my mother sounded like when she caught me listening...
4/3/1511:28 AM
❤️ 1

Ours was 2 shorts and a long (or was it 2 longs and a short?), also early '50s, Danville, California.  It was an idyllic new subdivision in the rolling golden hills, golf course next door and a community pool under the oaks, a short walk from home.  It would never have occurred to us that a party line made life any less wonderful.

Apparently Airbnb in Cuba, so far,  is only for Americans who have permission to go there.

Many of my Canadian friends travel independently to Cuba.

They all stay with these guys -Pinot and Agnia.

Too far from Havana to travel but it will give you a taste of what to expect from  Casa Particulars.

4/4/157:46 PM
❤️ 0
Back To Top
Post
Manage Blog Post
DrFumblefinger commented:
A portal and place to sit from this week's travel destination....