This week I am continuing to revisit my 2006 trip to the sites of three battles the turned the tide of World War II. After starting in Moscow, It was time to travel north, up to St. Petersburg. St. Petersburg, formally known as Petrograd and Leningrad, was founded by Peter the Great in 1703. It served as the capital of Russia from 1713 until the Russian Revolution in 1918. The city sits at the mouth of the Neva River, and has served as one of Russia’s primary ports. Peter the Great hired Domenic Trezzini to design the city in 1716. Trezzini was inspired by Venice and Peter’s city was built around a set of islands and canals.

During the time of the Russian empire, St. Petersburg became the cultural center of the country. Several opera and ballet companies are still based there, and it is home to The Hermitage, one of the largest fine art museums in the world.

In addition to having the chance to spend a few days with The Amazing Ms. D as she finished up a writers' workshop, I wanted to come to St. Petersburg to pay tribute to those heroes who lost their lives during the Siege of Leningrad. On Sept. 8 1941, German, Finnish and Italian troops advanced on the city, cutting it off from the rest of the Soviet Union. For over 2 years Leningrad was under attack and on its own.

The siege held until January 27, 1944. In that time, there were over four million Soviet military and over half a million Axis casualties. Also, there were over one million civilian deaths, many of them due to starvation.

If you travel south from the center of the city to Plotshchad Probedy (Victory Square) you will find the Monument to the Heroic Defenders of Leningrad. This monument and museum opened in 1975, to commemorate the 30th anniversary of the end of World War II. It consists of a large plaza surrounded by statues representing the soldiers and citizens of the city. There is an obelisk that marks the grave of the Unknown Soldier, along with gallery space for permanent and temporary exhibits. Of course, there is a lot to see in St. Petersburg. One place to visit is The Church on Spilled Blood. This museum of religious mosaics was built as an Orthodox church on the site of the assassination of Tsar Alexander II. It sits along the Griboyedov Canal, giving a wonderful walk and view as you approach it. There was a wonderful tourist market behind the museum. The Church on Spilled Blood

At the St. Petersburg Technical Institute you will find a throw-back to your high school chemistry class. The college was where Dmitry Mendeleev taught and is where he developed the first version of the Periodic Table of Elements. He, and it, have been memorialized in a small park across from the school, where there is a statue of the chemist and a huge wall mosaic of his table. You will find this tribute along Moskovskiy Prospect, across from the university. 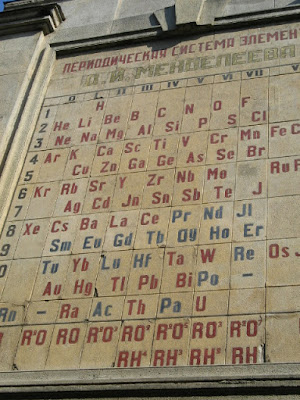 St. Petersburg is a city of canals and bridges. The Bank Bridge, with its beautiful Griffins. Nearby is the Singer House. Built as the Russian home of the Singer Sewing Company, is also served as the U.S. embassy during World War I. One interesting fact is that all of the bridges in the city remain closed all day long. There are so many, that to open them for boats would cause major traffic problems. Then, at midnight, they all open simultaneously, allowing boats to bring freight throughout the city. One popular activity, especially during the White Nights period, is to take a midnight cruise along the canals and rivers. A couple of weeks ago, I wrote that my impression of Moscow was a city trying to become a modern European capital. Well, to my eye, St. Petersburg is a city that revels in its past as the home of the Tsarist Russian Empire. It offers a lot to see and enjoy.