Mayflower II, the 1950s replica of the ship that brought the Pilgrims to Massachusetts in 1620, is ready to sail back to Plymouth, Massachusetts, its home for 60 years, following three years and $11.2 million worth of repairs and renovations that had led some to despair for its future.

Built in England and sailed to American in 1957 as a gift, it has served as a visitor attraction and live classroom at Plimoth Plantation, the living history museum in Plymouth. The ship has been at the preservation shipyard at the Mystic Seaport Museum in Connecticut where its work was done.

Shipwrights at Mystic worked with artisans from Plimoth Plantation to save the ship; they were able to save the original keel, but estimate that 75% of the ship is new, including 20,000 board feet of Danish white oak. 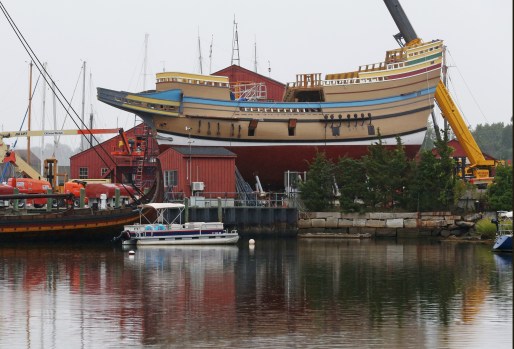 In drydock at Mystic

The next step before its trip home will be two weeks of sea trials off the coast before heading back to Massachusetts, where it's expected to arrive about August 10.

The original plans for the 400th anniversary voyage included a parade of historic ships in Boston Harbor and stops at several southern New England ports before crossing the ocean, but all those plans were scrapped because of the pandemic. The stops have been canceled, but the public will be able to follow the voyage online.

Sign In To Comment
Post
Manage Blog Post
PHeymont commented:
Not that I’ve seen, but I can say on personal experience that over the summer far more people have been doing ‘carry-on only’ as a...