When I first saw this statue while rambling around in Seville, Spain, my first thought was of Alice in Wonderland in New York's Central Park (below). But it quickly dawned on me that there were serious differences: this child was reading the book, and surrounded not by fantasy characters but books and other real objects. I took a picture and moved on; I meant to someday find out more. Recently, I came on the picture again while trying to turn disordered digital piles into an archive, and did some looking. The results surprised me.

This is no nostalgic image of a child reading storybooks; this statue, though ofa child, reflects the story of a very adult and powerful woman who was a pioneer campaigner for women's rights in Spain, Clara Campoamor. Campoamor's fiery speech at the first Constituent Assembly of the Spanish Republic in 1931 almost single-handedly put full suffrage for women into the constitution.

Campoamor was the child of working-class parents; she had to leave school at age ten when her father died to work as a seamstress, a typist, a typing teacher and eventually a powerful lawyer and journalist. Forced to leave Spain under Franco, she continued to write and fight until her death in 1972. 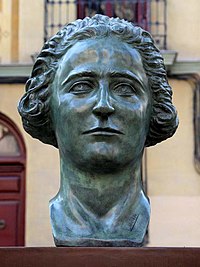 The statue was erected in 2006 on the 75th anniversary of her speech to the Assembly, one of two commissioned for the event. The one in Madrid is a classic portrait bust of the powerful speaker; the one in Seville, by Anna Jonsson was criticized as not being reverent enough.

Responding to an American writer who asked her why she had shown Campoamor that way, Jonsson replied “My thoughts were, How do you pay homage to a person you really admire?” Jonsson wrote. “How do you get people to want to learn more about her? Typically, you would recommend a book by or about that person. I would like everyone to read Campoamor; everyone, and especially my own beloved daughters. So I created a girl in the space of her own, her room with toys and books. Campoamor was a lawyer; therefore, among the toys is a blindfolded doll and a mouse resting on a scale. When it rains, the cup of the scale fills with water and it looks like the mouse is swimming. The titles on the spines of the books provide clues on how to read women’s history: History in between, in limbo, invisible, purple . . . and yes! the keys to history — Who won the war? Who wrote the book?”

Yes, and who made the statue!