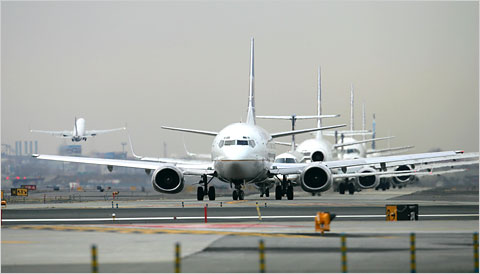 Lots of planes, little competition. Scene at Newark Liberty, where United controls nearly 70% of the traffic

As the U.S. airline industry has consolidated, competitive options at U.S. airports have shrunk. With 80% of U.S. domestic air traffic in the hands of the four biggest carriers, the number of airports dominated by one or two carriers has been growing. And when there's no real competition, prices tend to rise.

That's what the Associated Press found in its analysis of airline and airport data. 40 of the top 100 U.S. airports had a majority of traffic controlled by a single airline, compared to 34 ten years ago, and the number where two airlines share the majority rose from 78 to 93 out of 100.

An exception to the trend toward less competition is Seattle, where Alaska Airlines has dominated. Over the past two years, Delta has been aggressively adding flights and making it a major hub. One result has been many sales and special offers, and an overall drop in the average fares for Seattle flights.

During that period, airfares, adjusted for inflation, rose 5%, and that's not even counting the huge revenue from bag fees and the like that didn't even exist ten years ago. The AP writers compare the situation with pre-deregulation days, when the government determined which airlines could fly which routes and what they could charge.

The end of regulation led to more competition  and lower fares; the wave of consolidations appears to be moving back to the old status. And, as noted elsewhere, the federal government has notified the major airlines that it is looking into the question of  whether they are illegally collaborating to control capacity and fares. We'll keep our eyes open for more.