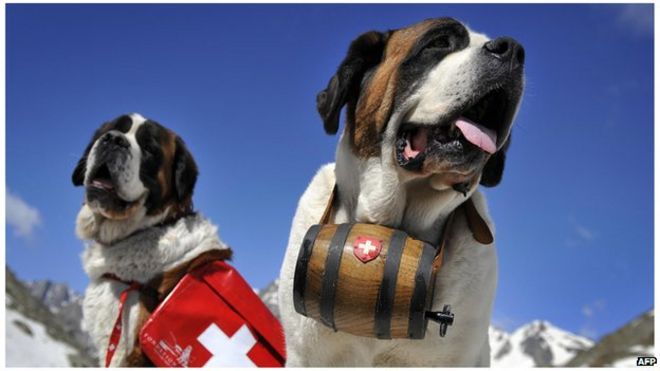 Modern times have decimated traditional ways and images all over the world; this evening I was devastated to learn that the famous Saint Bernards whose image, with brandy keg, says "Alpine" whenever and wherever you see it, are no longer used in Alpine rescues, bringing a warming drop of brandy to the frozen avalanche victim.

In fact, they were all retired a number of years ago, and are now the object of a rescue effort themselves. It turns out that the retired dogs, and some newer successors, have become just a big tourist attraction in Zermatt and other Alpine towns, where visitors pay a fee to have their pictures taken with the dogs.

A bit undignified, but harmless? Perhaps not. Zermatt has moved to ban the practice as cruel to the dogs, who have been housed in a condemned building without proper facilities and have been forced to stay outdoors in freezing weather for long days of selfie duty. The Swiss Animal Protection Agency has been investigating since 2012, and its report convinced the village to put its foot (or perhaps ski boot) down. MORE from BBC.