That's the kind of question that comes to mind at first glance at an idea Airbus has asked a patent for...a circular seating arrangement, in tiers. OK, that's a little hard to grasp, so here's a drawing submitted with the patent application. 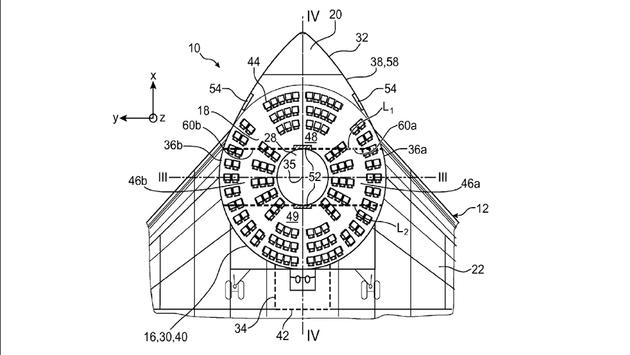 You'll notice that the seating arrangement would require a fairly radical change in the shape of the plan, toward a wider profile. Several of these circles would make up the plane.

So why even think of it? It turns out that this idea—which is so far only an idea, relieves a longstanding engineering problem of large planes. The rows and the air pressurization puts stress on both ends of the plane, forcing engineers to add heavy frames at both ends. Eliminate the problem, the plane becomes much lighter.

But where do the overhead bins go?

Maybe the overhead bins have, as they say, been binned.  Back to the days when it was considered a luxury to let someone else handle one's luggage.  I still think it is.

I think that seating arrangement would work well in zero gravity.  Think of the PanAm space cruises in the movie 2001: A Space Odyssey.  Unless planes will be designed in a flying saucer shape, I can't envision what the Europeans are planning.

11/21/148:08 PM
❤️ 0
Back To Top
Post
Manage Blog Post
Professorabe commented:
On our last visit (in 2021) we noticed a new option: sightseeing tours in 'vintage' electric cars. The prices seemed to be roughly on a...