The Hudson River Valley of New York is filled with history. It is also filled with beautiful nature trails to walk. Sometimes these overlap, and a visit to Cold Spring brings just such an experience.

The Village of Cold Spring (50 miles north of New York City) started as a trading post on the Hudson River. It was a place where ships would stop to pick up local produce and lumber and drop off manufactured goods. In the 1820s, its population expanded when the West Point Foundry was opened. Cold Spring was a very good place for the foundry. There were local iron mines, forests that provided wood for fuel and charcoal, and a brook that provided power to run the mill. Its established role as a shipping port, and proximity to West Point also were in its favor. 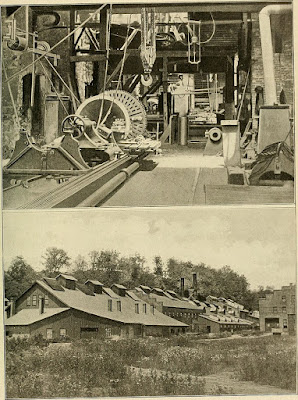 The West Point Foundry produced the iron that was used for many things, including the production of the USS Spencer, the first ironclad ship built in the United States. The foundry grew to occupy over 100 acres in a ravine just north to the town, along what is today called Foundry Brook. At its peak production, during the Civil War, the foundry employed 1400 people. It produced cast iron for steam engines and locomotives, and most of the pipes used to create New York City’s aqueduct system. It is best known for making the the Parrott Rifle Cannon, producing 2000 guns and three million shells.

By the 1870’s technology had started to pass by the foundry. Most industries had switched from cast iron to steel. West Point Foundry tried to adapt, but could not match the scale of the new steel mills being built in Pennsylvania, and in 1911, it ceased its operations.

The site was eventually abandoned, and the bricks and stones of many of the buildings were recycled in other construction projects. In the 1970’s, the area became the first EPA Superfund clean-up site, due to pollution from a nearby battery factory. In 1996, the area was acquired by Scenic Hudson, a conservation organization, to prevent development of the ravine. They cleaned up years of garbage that had been dumped on the site, and built trails among what is left of the buildings and created the West Point Foundry Preserve.

When you arrive, your visit will start at the parking area, where there is a display to orient yourself to the preserve. There are three trails to follow, Yellow (which stays closest to the old foundry buildings), Red (which branches off along the water routes through the ravine), and Blue (which connects the preserve to other sites, including the Putnam History Museum). If you head along the wide path, which follows an old railroad bed, you will arrive at the Gun Platform. Every cannon built at the foundry was brought by rail car to the platform, where it was test fired before being shipped out. The target of these tests was Crow’s Nest Mountain on the opposite side of the Hudson River. Leaving the Gun Platform, you follow the metal path up the ravine. The path follow the internal rails that carried the guns down to the test site. You will pass the floor of the carpentry shop and the last remaining wall of the pattern shop. The only building that is still fully standing is the Office Building that was built in 1865. Continuing on, there are remnants of the machine shop, and the molding and casting shops.

At the top of the path, you can follow of the Red Paths further up along Foundry Brook, where you will find the remains of the dam that created the Battery Pool, which held water to provide power to the mill. You will also be able to see the dam that sits at the top of ravine, which still controls the water flow, and protects the Preserve from flooding. Following the train tracks to the test platform Come back to the Yellow path, and climb the stairs. You will get a great view of the ravine, and see the statue that presents the actual size of the water wheel that powered the mill. From the top of stairs, you can follow the Yellow path back to the parking area, or follow the Red and Blue paths for more exploration. When you are finished walking through the area, head to Main Street for some lunch. I suggest Hudson Hil’s Cafe. They offer a choice of indoor or outdoor seating, and have a menu that includes sandwiches, salads, and an all-day breakfast menu. I loved their blueberry pancakes.

Nuts and Bolts:
The West Point Foundry Preserve is open all year and is free. It is located at the south end of Kemble Ave. There is parking available on site, and a well developed path from the Metro-North Station.

If you go to www.foundrytour.org you will find a map, and audio tour and information about the flora and fauna of the area.