If you are a regular reader of my posts you may have noticed that I really love taking pictures. I got my first camera when I was in the 3rd grade and I have loved photography ever since. I love taking pictures. I love the way pictures can tell a story or reveal a truth. Whether it's someones family, the realities of war, or a strobe shot that reveals how an event took place, photos show things that the eye often doesn't see on its own. So when I was in Rochester NY recently and had some free time I finally got a chance to visit the George Eastman Museum. I have been visiting Rochester NY on and off for almost 15 years, usually to attend a state-wide conference for science teachers. Rochester has struck me as a typical Midwestern city in the 2000’s. It suffers from many typical problems. Much of the population of Rochester moved to the suburbs many years ago, taking with it the main businesses from its downtown. Its downtown area has been mostly abandoned and is almost completely deserted on the weekends.

Rochester has remained home to several large companies. Xerox, Bauch & Lomb and Eastman Kodak have all kept their headquarters in Rochester, even if they have moved their manufacturing facilities to other places. Rochester is also home to Rochester University, Rochester Institute of Technology and The Eastman School of Music. So the city has maintained a cultural life even as it watched the life of the center of its city drain away. 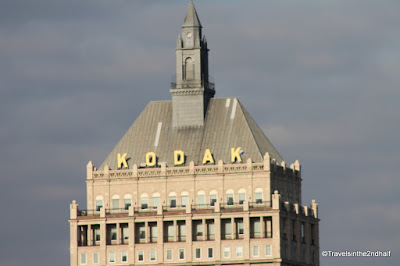 There have been several attempts to revitalize downtown Rochester. There is the Riverside Convention Center which brings conferences. There is also the Blue Cross Arena, home to the Rochester Americans who play in the AHL, and the Razor Sharks who play in the Premier Basketball League. The city has built a Riverwalk park. And there is more building going on. The ongoing presence of the major industrial headquarters and universities has meant that there has been a continuing presence of cultural institutions in Rochester. One of those is the George Eastman Museum – The oldest museum dedicated to photography in the world. George Eastman (1854-1932) was the founder of Eastman Kodak. He patented the first roll film and the first Kodak camera. The manufacture of these advancements made photography something that everyone could partake in. He built a mansion in the very fancy East Ave. neighborhood and when he died he donated that house to the University of Rochester to be their President’s Residence. The University found that it was too expensive to maintain this residence, so in 1949 they arranged with the Board of Regents of NYS to charter the George Eastman House INC., a museum of photography and film.

Today the museum consists of several buildings. The original mansion served as the museum for 40 years. In 1989 a new building was built with galleries, a library and conservation and preservation labs. The mansion and its gardens have been restored to way they looked when the Eastman family lived there.

My favorite part of the museum is the restoration of the Eastman House and especially it gardens. I had a great time walking around the old house. It is beautiful. It is the kind of house that they just don’t make any more. And it is filled with a collection of things that an industrialist of that age just had to have: The gardens are also beautiful, even in November. The vines along the house were turning a beautiful deep red and the vine covered trellises are fun to walk under. The museum has at least 2 different exhibits at any given time. They include modern photographers and historic ones. For example, when I visited there was an exhibition by Brian Ulrich called Centurion based on the premise that American Express had created a truly unique card for its biggest spenders. There was also a retrospective of work by Alvin Langdon Coburn a photographer whose work spanned from 1900 to 1966.   The museum also screens classic and contemporary films every day.

The George Eastman Museum is on what was the very ritzy East Ave. in Rochester. East Ave. was the home to Rochester's elite. They built mansions along the avenue, and while most of them are now apartments, they are still beautiful houses. Getting There: The George Eastman Museum is located at 900 East Ave. in Rochester. You can get there easily from downtown by driving straight out East Ave. From the suburbs take I-490 to Culver RD north. Take Culver Rd to East Ave, turn left onto East Ave. to the museum.

So interesting especially for anyone who loves history, beautiful houses and photography and that's me!! Well done!!

2/5/1610:55 AM
❤️ 2
Back To Top
Post
Manage Blog Post
DrFumblefinger commented:
Here are your final puzzle clues. Reveal will be up Monday. Good luck solving where we're at.