When I was 19 I spent a summer in Pittsburgh. I had a chance to explore much of the city, I spent most of my time in Oakland. I even had a crappy phone sales job based in that area. When I returned ten years later it was to bring a runner that I was coaching on a college visit to the University of Pittsburgh. So, my visit to the Steel City this year of course brought another chance to spend time in this neighborhood and to visit the Carnegie Museums.

The University of Pittsburgh is one of the oldest state colleges in the United States. It was founded in 1787 as the Pittsburgh Academy, a preparatory school on what was then the far, western edge of the United States. In 1819 it became the Western University at Pittsburgh. Today it is home to 29,000 students among its 17 undergraduate and graduate schools. It is also home to one of the premier medical facilities in the country – the University of Pittsburgh Medical Center. UPitt’s best known landmark is the 42 story (163m) tall Cathedral of Learning. Dedicated in 1937, this gothic building is the tallest education related structure in the Western Hemisphere. 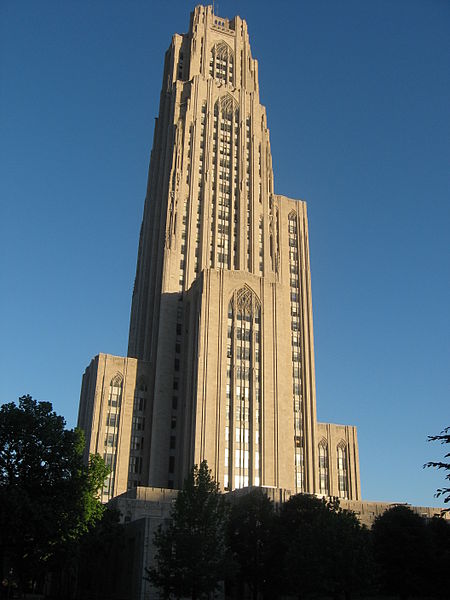 It was a snowy day

Sitting between UPitt and the nearby Carnegie-Mellon University are the Carnegie Museums of Art and Natural History. These museums are run by the Carnegie Institute, which also directs the attached concert hall and Carnegie Free Library, the Andy Warhol Museum, and the Carnegie Science Center. The Museums of Art and Natural History are two buildings, one old and one new, joined together to bridge the gap between these two categories of museums. You can visit each separately, but if you have the time, it is worth seeing both, and one ticket will get you into both.

The Carnegie Museum of Natural History by Piotrus via Wikicommons

The older building houses the Carnegie Museum of Natural History. Founded in 1896, it is a fairly straight forward natural history museum, with exhibits of local animal and plant life, and an ethnological exhibit for Native Americans. But it is best known for its dinosaur collection which dates back to 1899. Today the exhibit is called Dinosaurs in Their Time. It is the third largest collection in the United States. Like several modern exhibits this one has gone beyond just displaying bones and has put them into the context of the world in which they lived.

In this exhibition dinosaurs and other Mesozoic animals are shown in extraordinary detailed reconstructions of their respective environments. Like the dinosaurs themselves, the habitats in Dinosaurs in Their Time are firmly grounded in scientific evidence. – Museum Website.

Walk down the entrance hallway, to the modern building next door, and you have arrived at the Carnegie Museum of Art. Founded in 1895, this museum was inspired by Andrew Carnegie’s desire to exhibit the works of major contemporary artists. While its collection has expanded to cover much of the history of European art, it also includes decorative art, architecture and photography. One gallery that grabbed my interest was the Hall of Sculpture. This giant room is empty today, but tis balcony is lined with statues. Look at the photo below to see how the curators break the wall of time and also show their sense of humor. When you come to Pittsburgh the Oakland neighborhood offers a wide variety of sights and activities. With a university at its heart and two wonderful museums the investment of a day’s worth of time will bring back wonderful rewards.