Many of the cathedrals and major churches of Europe can trace their foundations back a millenium or more, and their present buildings on those foundations for six or seven hundred years. But Berlin's Dom, or Cathedral, while in the same location as previous churches, only opened for the first time a little more than a hundred years ago, and its true history rests on the events of 1870. By that, I mean that its reason for existence was very political: to show off the power of the new German Empire and its Kaiser, and to provide a unifying symbol for Germans who had only recently, and for the first time,  become part of something called "Germany." Up until 1870, Germany, unlike its powerful rivals such as France and Britain, was not yet a single state with a single government. In fact, even after the end of the Holy Roman Empire in Napoleon's time, there were 39 different states and kingdoms in what is now Germany (before Napoleon, there were even more!). The Congress of Vienna in 1815 set up a German Confederation of those states, dominated by Austria and Prussia. The idea of a single, powerful German state was strong among the growing industrial and business class, who wanted a powerful ally and support in world trade and tax benefits and more, but it was not popular with the large landowners and the local rulers. In a series of maneuvers and wars between 1863 and 1870, Prussia, under Bismarck and Kaiser Wilhelm I, managed to push Austria out, dominate the others, and—in the aftermath of the Franco-Prussian War—get the others to agree to unification under the Prussian King, who became Emperor of Germany. Flash forward a few years: The German Empire is growing in industrial, military, colonial and financial power. New buildings and improvements are going up everywhere. What more likely time to build a show-off cathedral! Construction started in 1893, and the building opened in 1905, across the street from the City Palace of the Kaiser. Formally, the style of the building is described as "high neo-Renaissance" style, while others have used the term "wretched excess." You'll have to decide for yourself. I found some aspects of it beautiful, some even stunning, while feeling the total effect was overwhelming and even boastful. Certainly, it was designed to impress the visitor and worshipper with the power of the German Emperor and not that of his god! At the time, commentators also talked about it as a Protestant answer to St. Peter's in Rome. It certainly is massive in its dimensions, although not as large as St. Peter's. It's about 375 feet (114 metres) long, 240 feet (73 metres) wide, and the height to the center of the dome is 381 feet (116 metres). That height is a little lower today...see below for why. Less than ten years after this monument to the Kaiser and German power opened its doors, World War I began, and at the end of the war, the Kaiser was deposed and left for exile in Holland, leaving behind the crypt below the church where scores of his royal ancestors and relatives remained, some in plain circumstances, and some in the most ornate sarcophagi I've ever seen. The church as we see it today is only recently in all its glory, after restoration of World War II damage, which happened in two stages. First, in 1940, Allied bombs dropped nearby shattered the church's windows. Then, on May 24, 1944, an incendiary bomb landed inside the church, coming straight through the center of the dome, the lantern, which was unreachable by firefighters. It burned out and collapsed to the main floor. 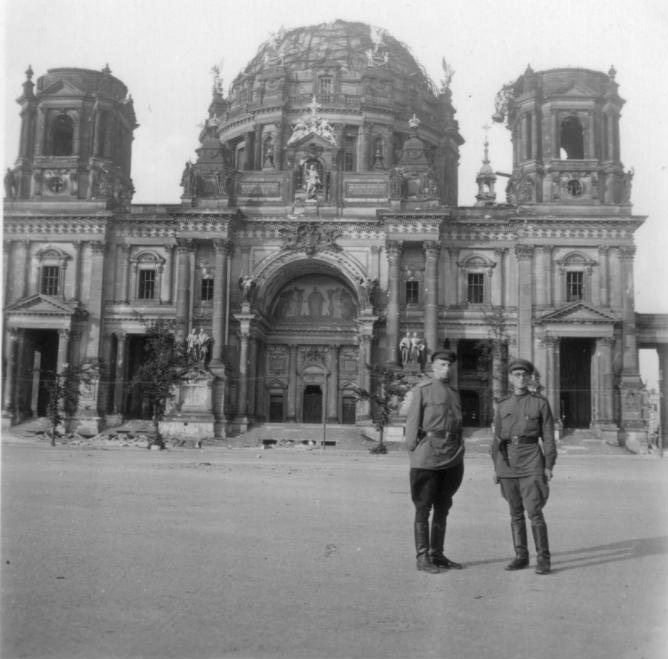 The picture above, from the German federal archives, and with Soviet soldiers in the foreground, shows the state of the church in May 1945. After the war, a temporary roof was put up to cover the building and prevent further damage, but nothing else was done for over 20 years. Politics entered into that; the Dom was in the eastern sector of the city, and rebuilding churches, rather than housing, was not high on the East German government's agenda. However, in the 1960s, the German Lutheran church, which still both represented East and West Germany, formed a committee for reconstruction and started raising funds. The East German regime gave them the go-ahead—if for no other reason than that the construction work brought hard currency to the East. There were conditions, though: While the Dom itself could be restored, the government insisted on removing the next-door Denkmalskirche, or Memorial Church, on grounds that it was not really anything more than a memorial hall for the Hohenzollern kings of Prussia whose ideology was considered to be at least partially responsible for both World Wars. There's a committee now talking about rebuilding it. The rebuilding took part in stages, with the Baptistery and wedding church open in 1980, and the rest in 1993, with a big televised ceremony attended by then-Chancellor Helmut Kohl. A comparison of the model (displayed in the Dom) showing it as it was built and the photo below it show the modification in the steeple and roof lantern; that and a number of other details were modified, partly for economic reasons, during the reconstruction. And, of course, there are still those who want to rebuild again to the original. Thanks for all this history. I never knew the full story. Will have to visit again.

Terrific photos and a great concise history! I need to get back to Berlin, it's been years!

8/2/1510:25 AM
❤️ 0
Back To Top
Post
Manage Blog Post
Professorabe commented:
I have avoided BA since the beginning of last year, after they treated us abysmally over cancelled flights at the start of the pandemic.